You just got 2 cats? Or you have 2 sister cats or brother cats? Purr-fect! To make naming double easy, why not consider twin cat names that work for your new friends. There is a variety of wonderful cat pair names based on people, personality traits and appearance.

We know that choosing a kitten name is not easy, and if you have two cats, the task is duplicated. Below, you will find a list of names for two cats that may be of inspiration to decide the names of your two kittens.

Below each pair of names, you will find a brief description to understand the origin of cat names and their meaning better. Which twin cat names do you like the most for your cats?

Although they are the names of the most famous cat-mouse pair, calling your cats Tom and Jerry can be an entertaining and original option. And if the color of your cat is similar to the original color of these cartoon characters, much better, do not you think?

The popularity of these two friends can also serve as a reference to decide the name of your cats. Ideally, each of the cats should be a different color, one with a coat of dark color (possibly black or dark gray) and another with lighter shades (white, orange or light gray).

One of the most popular children’s games in history. This pair of names for two cats is a very peculiar combination for the most beloved kittens in the house.

The rhyme is, without a doubt, the most striking element of this cat pair names. Both are funny names for cats and are ideal for active and agile cats.

Most famous lovers in ancient history.

If you have two cats of different gender, you can also play with these two names of the Disney movie, The Lion King, to decide their names. They are, without doubt, very common names among felines, the most beautiful and distinguished.

Famous cats from cartoons, these two cat pair names are associated with cats of different characters, both active and lazy, as well as family and independent.

These Greek god names make a perfect combination for cats and will reinforce the active and intelligent character of your kittens.

A song by Paul McCartney featuring Stevie Wonder. Meaning the ebony (black) and ivory (white) keys on a piano. Perfect for black and white pair of cats.

Do you like kitten names related to food? If you are looking for original, unusual but beautiful names, Coco and Kiwi will be a good option to call your two cats.

Claws and Whiskers are two names that go perfectly together and are also ideal for any cat breed you prefer.

If you are a fan of The Chronicles of Narnia, these names will be familiar. Aslan and Caspian are two of the most important characters in this saga and refer to the names of two kings.

Criminal couple known for their bank robberies, small stores or funeral homes during the Great Depression. If you have two outlaw cats the these names are for you.

The main couple in the Twilight Saga. The vampire-themed romance fantasy film based on the novels. Great twin cat names for two black cats.

When Edward leaves Bella, she is finding solace with Jacob a werewolf in The Twilight Saga New Moon. For a pair of wolf cats.

Couple from The Addams Family. Parents of Wednesday, Pugsley and Pubert.

In Greek mythology, Perseus son of Zeus rescues Andromeda from a sea monster and they got married. They had seven sons and two daughters. Great mythology cat pair names.

Spices which are traditionally paired and necessary on dining table. Cute names for two cats.

Chinese Philosophical concept that describes how obviously contrary things may actually be complementary and interconnected. 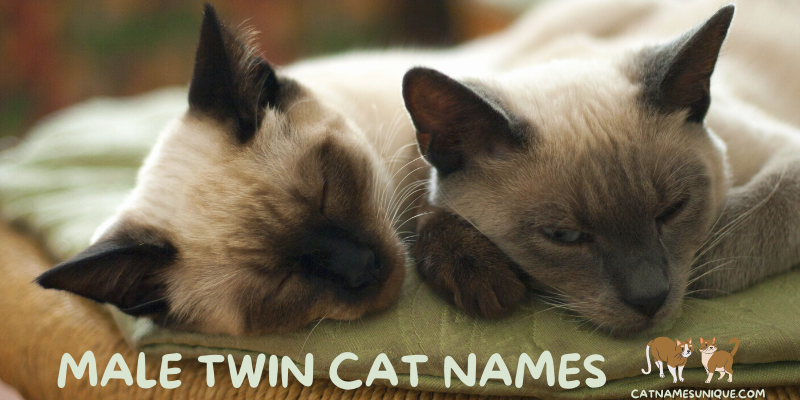 Characters from The Flintstones

Butch Cassidy and The Sundance Kid

Brothers from the Bible

Commander in Chief, US president as head of the military

Characters from the Bible

Douglas Fairbanks, actor of the golden era of cinema

Fictional brothers from the sitcom Frasier

Siblings Kevin and Joe from The Jonas Brothers

The Gallagher brothers from the band Oasis

James Bond henchmen (Goldfinger and For Your Eyes Only)

Bond characters (Smithers, For Your Eyes Only) Felix Leither

Characters from the movie Wayne’s World

Do you have a pair of male cats? Or you have two brother cats? Then these male cat pair names will be great.

Some couples were wildly in love…others were at each other’s throats. Are your cats lovers or fighters?

There are many more categories of cat names on Cat Names Unique. From white cat names for the white kittens to the black cats with black cat names. From exotic cat names for all exotic breeds out there to the most unique cat names. The choice is really big, so don’t rush.